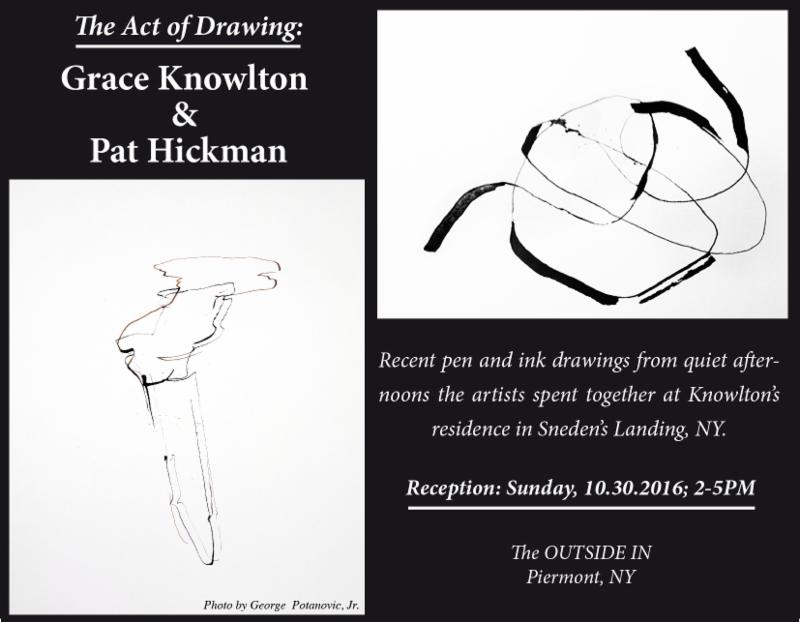 The Act of Drawing: Grace Knowlton and Pat Hickman.  Recent pen and ink drawings from quiet afternoons the artists spent together at Knowlton’s residence in Sneden’s Landing, NY. Hickman is an admirer of Knowlton’s, “How to Draw Wrong”.  Their results emphasize the physical act of drawing itself as an essential aspect of a finished work. Reception 10/30/2016; 2-5PM at The OUTSIDE IN, Piermont NY.

Pat Hickman is Professor Emerita of the Art Department, University of Hawaii, where she taught for sixteen years. Her studio is now at the Garnerville Arts and Industrial Center, NY and she lives nearby on the Lower Hudson River. Hickman’s work is in major collections, including the Renwick Gallery, Smithsonian Institution, the Oakland Museum, the Philadelphia Museum of Art, the Boston Museum of Fine Arts, the Honolulu Academy of Arts, and the Hawaii State Art Museum, among others. In Hawaii, Hickman’s commission, Nets of Makali’i-Nets of the Pleiades, stands as monumental entrance gates for the Maui Arts and Cultural Center. Hickman twice received NEA Individual Artist’s Grants. In 2005, she was elected a Fellow of the American Craft Council, and she served as President of the Textile Society of America (2008-2010). Hickman curated two traveling exhibits: Innerskins/Outerskins: Gut and Fishskin (1987) and Baskets: Redefining Volume and Meaning (1993). Artist website

Knowlton received her Master of Arts in Art Education at Columbia University Teacher’s College in New York after earning a Bachelor of Arts at Smith College in Massachusetts and has taught at the Art Students League among other teaching posts.   Internationally known, Ms. Knowlton has been widely exhibited, and is represented in many public and private collections, including the Victoria and Albert Museum, London; the Corcoran Gallery of Art, Washington, D. C.; Yale University Museum of Art, New Haven; the Metropolitan Museum of Art and the Brooklyn Museum of Art, New York City.  Knowlton has been featured in Art in America, The New Yorker, Architectural Digest, Arts Magazine, The New York Times, Sculpture Magazine and Vogue. Artist website

Uncommon ARTefacts for the Inside & Out.